Please make a note that the branches of Start Community Bank will close early, 12 noon, on Christmas Eve, Monday December 24.  We will also be closed all day December 25, Christmas Day.  May the holidays be filled with the warmth of your family, the support of your friends, and the comfort that comes from a caring community.

Sunday, 4:08 pm was my first photo, 4:35 my last - kid on a white and red dirt bike, black sweatshirt with white letters, black helmet with white striping of some sort -- up and down, up and down Quinnipiac Park from Grand to Ferry -- and it looked like there was an adult with him encouraging him on!  Check out my posted photos.  I called and  reported  this to the police, as did my upstairs neighbor.  For pete's sake, kids were in the park, people were walking their dogs, and this kid ran…

MARK YOUR CALENDARS FOR NOV 14

Because of the Thanksgiving holiday on November 22, please note that our November monthly meeting will be one week earlier than normal -- so mark your calendars to come to the Mary Wade Home at 6 pm on Wednesday, November 14...... a change for this one month only!  Thanks

Looking for Treasurer for CSNA

Do YOU have what it takes to be the treasurer of the best community activist group in the USA?

We are looking for a dynamic, engaged, committed volunteer to manage our finances.  Ability to add and subtract is a plus!

Don't worry - no public debates, no negative ads, no need to put Big Bird in jeopardy.

No stress, no heavy lifting - just a fabulous way to share your expertise and add a stellar line to your resume!

You process deposits and donations and authorize…

As many of you know, I will be retiring effective October 31 and moving back to the Boston area.  The past three and a half years have been challenging, frustrating, rewarding, wonderful, heartbreaking, amazing -- you name it!  From the daunting task of building a community bank from the ground up, to the agonizing wait to be chartered, to finally opening the doors and feeling the welcome from the community -- it's the hardest work I have ever done, and the most rewarding.  I often say my…

Sep 21, Friday night, 6:25p, leaving the ARTE exhibit at Grand and Front, walking back to my place -- two dirt bikes come screaming around the corner off the bridge and onto Front Street,  At Exchange they were both doing wheelies, weaving around cars and scaring the hell out of people.  It appeared to me that the drivers were wearing white masks.  I managed to take a quick snapshot with my camera, but they were going so fast I only got part of the image I wanted.  I did report…

Start Community Bank was delighted to been recognized by Business New Haven for the work we are doing in our community.  Now, it's a mystery to me that as everything on my body is sagging and drooping I am named a Rising Star -- but the spirit is ALWAYS rising even if body parts are not.

In any event, we are delighted to receive so many pieces of good news this month - first this award, and then an award from the Chamber of Commerce for our nonprofit partnership with Solar…

The Christopher Columbus Family Academy at 255 Blatchley Street in Fair Haven is designed for its students to have hands-on experiences. Paper airplanes and pinwheels are art pieces incorporated into the walls of the building, which allows students to measure angles.  Need to learn about north, south, east and west?  Just identify the four trade wind sculptures that will help you find the way.  Want to become an astronomer?  Begin by searching for Cassiopeia in the mosaic of the entrance…

Visit by the Ambassador to the United States from Ecuador to Fair Haven, CT

Nathalie Cely Suarez, the Ecuadorean Ambasador to the United States, visited the Columbus Family Academy on Friday, March 16, 2012, just one stop in her busy schedule during a visit to the United States to promote business relationships and partnerships with Ecuador.  Warmly welcomed by principal Dr. Abie Benitez, the students of the Columbus Family Academy were delighted to have such an honored guest.  Leida Pacini of the New Haven Public Schools presented Ms. Suarez with an honorary…

The Parish Hall of St. Rose of Lima Church was filled with families this Sunday, eagerly anticipating the concert presented by INTAKE to celebrate and honor women - and mothers, sisters, aunts, grandmothers and their families all enjoyed a moving program.  Angelica Durrell, Founder and Artistic Director, welcomed the audience and explained that INTAKE's mission is to connect locate communities in the diaspora to classical music through the use of culturally native instruments. …

The halls of the Fair Haven School were filled this afternoon with the music of J.S. Bach, Saint-Saens, and Mendelssohn thanks to the talents of the New Haven Chamber Orchestra.  A delighted crowd welcomed the 29 member orchestra, whose musicians reside and work in our local communities.  Founded in 2004 by Gordon Emerson, this group of school teachers and lawyers, business people, scientists and administrators all share a passion for music and are committed to playing the masterworks of…

It is amazing to think that one year ago, January 25, 2011, during a snowstorm – of course – we welcomed our community to the Start Community Bank Grand Opening and cut the ribbons at our Whalley and Grand Avenue branches.  We had received our official charter at the end of December 2010.  In a typical year, about 100 banks in the US  earn a charter.  In 2010 there were 3; and we were one of those three.

1500 accounts and $17 million in deposits later, we want to take the time to…

Check out the photos of the fall festival - a grand time was had by all!  Music, dancing, arts and crafts, great food, terrific information from dedicated community groups and nonprofits to inform our neighborhood -- just a wonderful time was had by all! 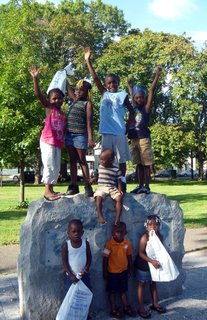 For the first time, participants in the summer jobs program Youth@Work had the chance to sign up for direct deposit and open a savings account at Start Community Bank in their own name, no parent co-signor required.  The account came with an ATM only card with a limited daily withdrawal amount. Every Youth@Work employee, over 500 of them this year, first went through "Loot Camp" where they learned about…

Here's the article that appeared in the July 30th Register about one of the sessions that is part of a full program for children at Quinnipiac Terrace, led by two dynamic members of CSNA.

Great work by Mary Ann, Sally, and all the volunteers to make the program great!…

On a gorgeous Saturday morning it was a special treat to witness the signing of a covenant to promise friendship and support between the Native American tribe and the people of the region. I particularly enjoyed learning more about the earliest inhabitants of Fair Haven.

Check out the article in the Register

What a wonderful gathering of friends, supporters, and residents who shared a warm ceremony to cut the red ribbon and open the new wing of the Mary Wade Home.  The food was delicious, the champagne flowed, and the speeches were short and sincere.  Thanks to everyone on the staff who made it a memorable event.

Any photos of the Easter Bunny in Chatham Square?

The Easter Bunny that stopped by Chatham Square for the egg hunt would LOVE to have a photo or two for her scrapbook.  So if anyone took a photo that can be shared, can you post it here?  She wants to make The Tooth Fairy jealous.  :o)